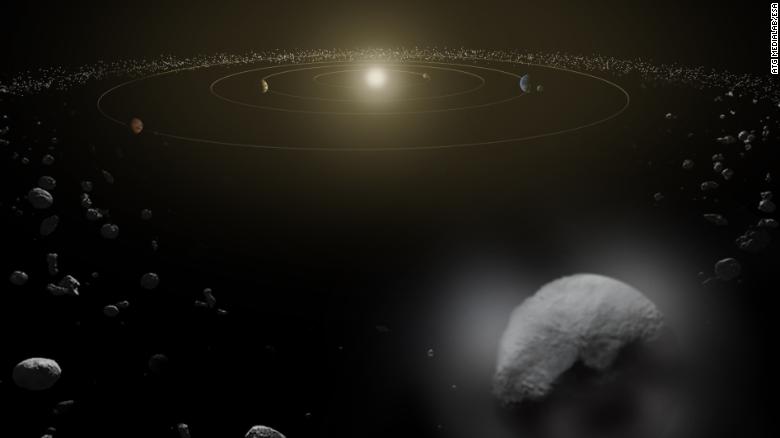 "Phosphorus is essential for life as we know it", adds Altwegg. The new results from the Atacama Large Millimeter/Submillimeter Array (ALMA) and from the ROSINA instrument on board Rosetta, show that phosphorus monoxide is a key piece in the origin-of-life puzzle.

The molecules containing phosphorus are made in the wake of massive stars as they form. In this region, stars are born from massive clouds of gas and dust - and it's here that some of the key building blocks of the solar system, as well as life, can be found.

The team found that gas from young, massive stars created openings in the star-forming interstellar clouds, and on the walls of those cavities, phosphorous-bearing molecules form.

To find out, an global team of astronomers used a group of telescopes in Chile called the Atacama Large Millimeter Submillimeter Array (Alma).

A new study suggests that comets had a huge hand in helping life form on Earth, bringing integral elements such as phosphorus, "an essential element for life", to the planet.

ALMA was able to give the researchers an up-close, detailed look at the star-forming region AFGL 5142. The colors here indicate the presence of phosphorous molecules in cavities amid the dust and gets from a young star.

The meteorites are believed to have contained a phosphorus-bearing mineral called schreibersite. Additionally, they found that phosphorous monoxide was the most abundant of these types of molecules. They hoped that by following the trail of these phosphorous-bearing molecules from where they originated, they might see how those molecules can get trapped in the icy dust grains that surround a star.

Those dust grains gradually come together to form pebbles, rocks and ultimately comets, which then become transporters of phosphorus monoxide.

Dr Rivilla said: 'The combination of the ALMA and ROSINA data has revealed a sort of chemical thread during the whole process of star formation, in which phosphorus monoxide plays the dominant role'.

"Since comets may have delivered a significant amount of prebiotic material to the early Earth, this finding suggests that [phosphorus] could contribute significantly to the phosphorus reservoir during the dawn of our planet", the researchers wrote in the study's abstract.

This intriguing journey could be documented because of the collaborative efforts between astronomers. "The detection of phosphorus monoxide was clearly thanks to an interdisciplinary exchange between telescopes on Earth and instruments in space", says Altwegg.

'The synergy between world leading ground-based and space facilities, through the collaboration between ESO and ESA, is a powerful asset for European researchers and enables transformational discoveries like the one reported in this paper'. The background of this infographic shows a part of the night sky in the constellation of Auriga, where the star-forming region AFGL 5142 is located.

Mosaic of comet 67P/Churyumov-Gerasimenko, created using images taken on 10 September 2014 when ESA's Rosetta spacecraft was 27.8 km from the comet. This first sighting of phosphorus monoxide on a comet helps astronomers draw a connection between star-forming regions, where the molecule is created, all the way to Earth, where it played a crucial role in starting life.