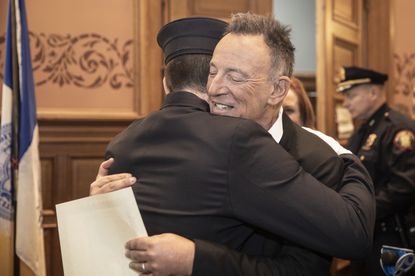 With his proud parents Bruce Springsteen and Patti Scialfa and brother Evan in the audience, Sam was one of 15 new firefighters sworn in by Mayor Steven Fulop and Public Safety Director James Shea.

The Jersey City Fire Department responds to 1,300 fires each year, according to a statement by Mayor Steven M. Fulop.

Bruce Springsteen beamed proudly as his son Sam with wife Patti Scialfa was sworn in Tuesday as a firefighter with the Jersey City Fire Department.

"This is really my son's day", Bruce told reporters. "He was very dedicated for quite a few years, and we're just excited for him today".

Sam's mom broke the news last summer when his she posted on her Instagram "you followed your dreams".

Jersey City officials said this group of new firefighters is the department's 10th class since Fulop took office. She told her son to "stay safe" and "love your courageous heart!"

Asked if becoming a firefighter had been hard, Sam Springsteen simply said, "It wasn't easy".

On Tuesday, Sam Springsteen was sworn in, and his famous father was on hand to witness the event.

More than 200 firefighters have been hired since 2013.

The youngest of Bruce and singer-songwriter Patti Scialfa's three children had been a member of the Colts Neck Fire Department close to his folks' home.