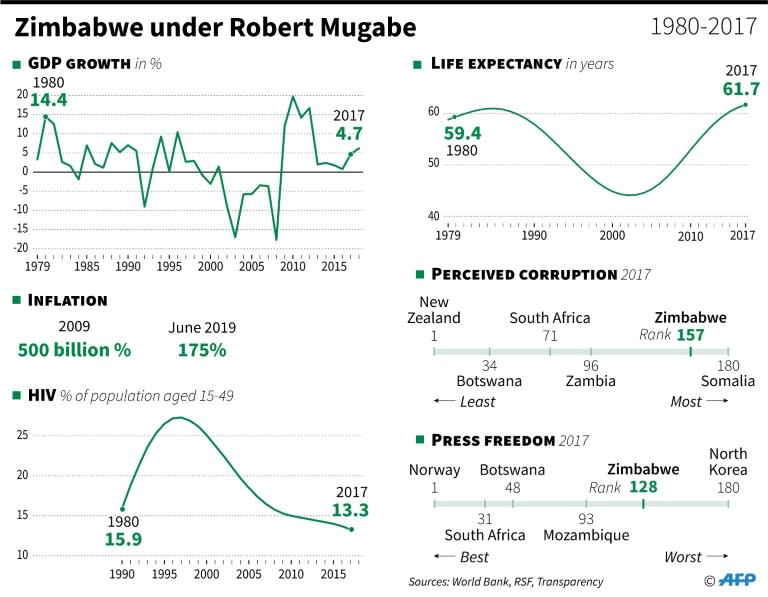 Independent reports during Mugabe's time in office suggested his family-owned up to 13 farms, though some were said to belong to relatives.

Mugabe, who ruled Zimbabwe from the country's independence from British colonial rule in 1980 until being ousted in November 2017, died on September 6 at the age of 95 in Singapore, where he had been receiving treatment for prostate cancer.

Last week, a United Nations official warned Zimbabwe was on the brink of man-made starvation.

There had always been rumours about his wealth, including a Scottish castle.

But there was no mention of these in a letter by his daughter, Bona Chikowore, to the high court, quoted by the state-owned Herald newspaper.

The list does include two properties in upmarket suburbs of the capital, Harare.

The properties listed are a house in Waterfalls, a Villa in Gunhill, a house in Mt Pleasant, a Lot in Helensvale, a farm in Highfield, an approximately five-acre rural farming plot in Zvimba, Zvimba rural home sitting on one hectare, five-acre Zvimba orchard and 10 cars.

"The 10 cars are a vintage vehicle collection which frankly had value only to him", Mr Hussein added.

The late former president Robert Mugabe apparently died intestate, his lawyer has revealed. "The long drawn out process has only begun", the family's lawyer told the BBC.

Bona said notified the Master of the High Court that Grace Mugabe was the sole surviving spouse, and listed four children: herself, Robert Junior, Chatunga Bellarmine and Russel Goreraza.

An estate of a person who dies without a will is distributed to beneficiaries made up of his or her children and surviving spouse.

Half of Zimbabwe's population, or more than seven million people, is experiencing severe hunger, the UN World Food Programme said on Tuesday, calling it a "vicious cycle of sky-rocketing malnutrition that's hitting women and children hardest". Almost eight million people overall are in need, it added.

Zimbabwe is now going through a severe economic crisis, with rising inflation, compounded by a drought across southern Africa.

Many had hoped Mnangagwa would fare better but the hardships that Zimbabweans suffered under Mugabe have returned to haunt the country. But the current government has been accused of economic mismanagement and human rights abuses.