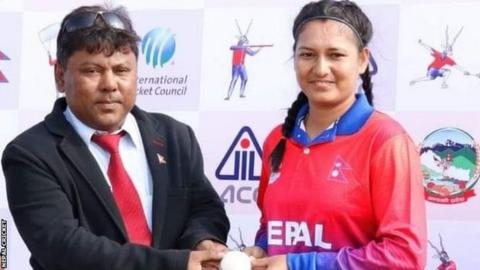 Chand's six wickets for no runs came in 13 balls and included a hat-trick for the 24-year-old debutant.

Chand bowled 2.1 overs without conceding a single run as Nepal bowled out Maldives women for 16 in 10.1 overs.

Anjali struck thrice in the 7th over and twice in the 9th over before wrapping up the Maldives innings in the 11th over.

Chasing a below-par total of 17, Kajal Shrestha hit two boundaries in the first over as Nepal finished the match in just five deliveries.

Nepal worldwide Anjali Chand has set a new Twenty20 record after finishing with the staggering bowling figures of 6-0 in a win over the Maldives.

Previously, Mas Elysa of Maldives had held the record with figures of 6 for three against China in 2019.

The scintillating show in the middle helped Anjali Chand to become the latest owner of the record for best bowling figures in T20I cricket. Nepal is competing with Maldives, Bangladesh and Sri Lanka in the 4-team tournament in Pokhara.