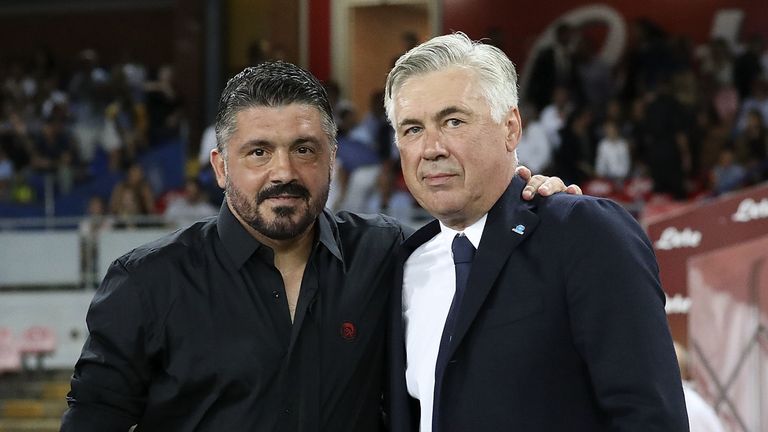 Napoli have sacked manager Carlo Ancelotti despite the club's progression to the last 16 of the Champions League on Tuesday night.

Arkadiusz Milik's hat-trick in the first half helped ensure the Partenopei finished second in Group E behind Liverpool and ended their nine-game run without a win in all competitions.

The statement said: "Napoli has chose to revoke the role of technical manager of the first team from Mr Carlo Ancelotti".

"The rapport of friendship, admiration and reciprocal respect between the club, its president and Carlo Ancelotti remains intact".

Arsenal are also considering Ancelotti, who managed Napoli for 19 months, to become their next manager, according to Sky in Italy.

"I'm not sure if I'll be on the bench next Saturday, I hope to be and I'll talk to the president (Aurelio De Laurentiis) tomorrow to clarify matters".

"[On Wednesday] there will be a meeting agreed by mutual consent to evaluate the situation as it stands right now. This team has quality and proved that in the Champions League, whereas we haven't been able to yet in Serie A".

Napoli had started the season among the Serie A title favourites and were close to a famous draw in their second match of the season when they came from 3-0 down to level it up at 3-3 away to Juventus, only to lose through a calamitous Kalidou Koulibaly own goal in stoppage time. "Will I resign? I've never done that in my life".

Jennifer Lopez thanks fan for asking entire flight to watch 'Hustlers'
In 1998, she was also in the running for Best Performance by an Actress in a Motion Picture (Musical or Comedy) for her role in Selena . 12/11/2019

Aaron Jones leads Packers past Washington, 20-15
After 14 points in the first quarter, Green Bay had only two field goals in the remainder of the game. Haskins threw for a touchdown late in the fourth quarter to fellow rookie Terry McLaurin. 12/11/2019

Australia set to field unchanged XI in Perth's 'sauna' like conditions
The Black Caps haven't won a Test series in Australia since 1985, their only victory across the Tasman. The right-hander has averaged 59 or above in five of his past six years in Test cricket. 12/11/2019

Hamilton not denying Ferrari contact, dismisses 'quick decision'
But following the race the Silver Arrows chief admitted Hamilton could walk away. "A sports team is not static". Britain's world champion Lewis Hamilton celebrates win No 11 of the season at the Abu Dhabi Grand Prix . 12/11/2019

Lizzo's Controversial Lakers Outfit Was Inspired By This Rihanna Look
I'm surrounded by love, and I just want to spread that love - and also spread these cheeks. She added: "I'm blessed, and I want you to know that you're blessed". 12/11/2019

UK October GDP flat
The GDP of the United Kingdom was also flat in the three months to October in comparison with the period from May to July. Construction growth dropped 2.3 percent due to a decline in new private housing and infrastructure. 12/11/2019

Munster grind out ugly win over dogged Saracens
Munster held on to claim a vital win and keep their hopes of progressing to the quarter-finals very much alive. After reviewing the incident with the TMO, match referee Jerome Garces showed a red card to the South African. 12/10/2019

Vanna White Makes 'Wheel of Fortune' Hosting Debut, Talks About Her Nerves
White is recognized by the Guinness Book of World Records as "television's most frequent clapper". The procedure was successful, and White will continue filling in as host for the next 3 weeks. 12/10/2019

Jaguar upgrades I-Pace with increased range for free
Customers are being invited to take vehicles to their Jaguar Retailer to receive the complimentary update. Jaguar has refined thermal management control by using the active radiator vane system more frequently. 12/10/2019

Oil prices slip as weak China exports highlights trade war impact
The supply being cut of course is bullish for crude oil , but at the same time there are concerns about demand. American output has risen even as the drill count has fallen, reflecting more efficient well extraction. 12/10/2019

George Kittle recalls crucial catch that helped 49ers to victory over Saints
Raheem Mostert was fantastic yet again for the 49ers on a day when Tevin Coleman really struggled. Matt Breida returned to action Sunday after missing three games with an ankle sprain. 12/10/2019

Jose Mourinho gets in touch with Fellaini for possible switch to Spurs
It is also claimed that Tottenham have no desire to end the 23-year-old's loan early. The incident comes after several other shameful events in football last weekend. 12/10/2019

Biden video says world leaders are laughing at Trump
The daily Presidential Tracking Poll by the Rasmussen Reports finds that 52% of Likely U.S. Footage of the palace reception was recorded by a pool camera. 12/10/2019

Le’Veon Bell won’t be disciplined by Jets for bowling trip
Bell was medically cleared and rejoined his Jets teammates Monday night for the team's weightlifting and walk-through sessions. He wasn't around for Saturday's walkthrough, and wasn't seen at Sunday's 22-21 win over the Miami Dolphins . 12/10/2019