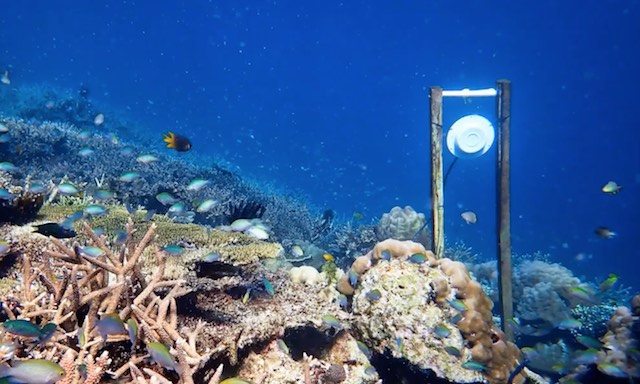 Known as "acoustic enrichment", researchers believe that putting underwater speakers near the dying reefs could help bring young fish to the reefs and restore them. The team calls the technique "acoustic enrichment" and think it could be a valuable tool in helping to restore the damaged coral reef. But this technique could be used in tandem with others being developed by scientists and researchers, including re-planting fresh coral and developing heat-resistant coral strains, to return vibrancy and life to portions of the oceans' reefs where human activity has taken a serious toll. The team says that fish are crucial to coral reef function as a healthy ecosystem. It may sound a bit like a bait-and-switch, but previous research has shown that one way to help reefs that are under duress is to encourage diverse and abundant fish populations, which can help counteract the downward spiral that ultimately leads to reef death.

Reefs become quiet when they are damaged as shrimps and fish disappear but using loudspeakers to play out this noise can attract young fish back again. "Juvenile fish home in on these sounds when they're looking for a place to settle", wrote senior author and University of Exeter marine biology professor Stephen Simpson.

Why do healthy coral sounds make a difference? The six-week experiment found that by playing healthy reef sound, the total number of fish arriving in the degraded coral areas doubled and also increased the number of species by 50 per cent.

The researchers said that the diversity included species from all sections of the food web: herbivores, detritivores, planktivores, and predatory piscivores. If combined with habitat restoration and other conservation measures, rebuilding fish communities in this manner might accelerate ecosystem recovery.