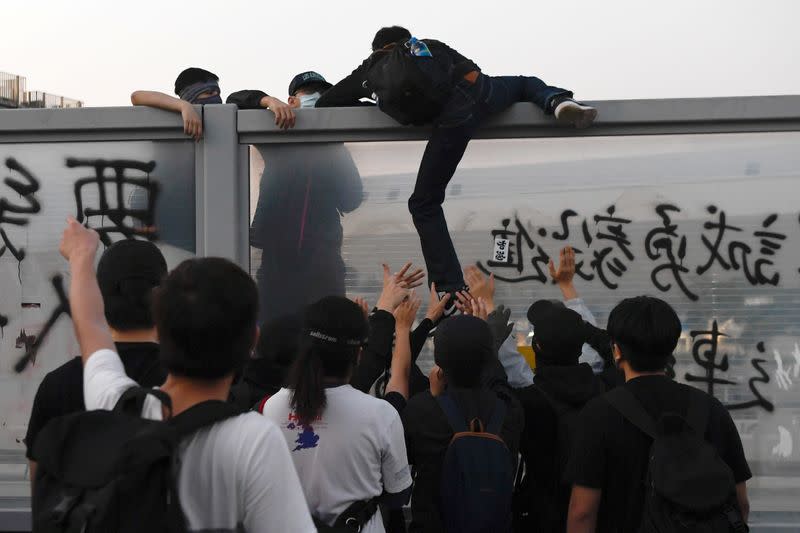 Hong Kong has been rocked by six months of sometimes violent unrest in the biggest challenge to Chinese stability since the bloody crackdown on pro-democracy protesters in and around Beijing's Tiananmen Square in 1989.

USA -headquartered NGOs such as Human Rights Watch and Freedom House "should be punished and pay the price" for supporting "extremist and violent criminal acts" as well as "inciting separatist activities of Hong Kong Independence", Foreign Ministry spokeswoman Hua Chunying said at a regular press briefing.

Companies "will be anxious about the actions the USA government may take in the future after they review this legislation", she said.

Hong Kong leader Carrie Lam said on Tuesday U.S. legislation supporting protesters may damage business confidence in the financial hub, as she announced a fourth round of relief measures to boost the city's battered economy.

While China has in the past suspended visits by US military ships and aircraft, sanctioning NGOs, especially those with connections to the USA government, would bring conditions for civil society in Hong Kong significantly closer to those in mainland China. That comes after a ban by Beijing against USA military from visiting the city.

The institute has no role in the current protests, and "to suggest otherwise spreads misinformation and fails to recognize the movement stems from genuine grievances", he said.

There was "already a large amount of facts and evidence that make it clear that these non-governmental organisations support anti-China" forces and "incite separatist activities for Hong Kong independence", Ms Hua said.

Cheng, who returned home from Beijing yesterday, told reporters that she had suffered a bone fracture around her wrist and had an operation in London.

Hong Kong leader Carrie Lam aligned herself with the Chinese regime in her weekly press conference on December 3 over Beijing's suspensions of US port calls to the city.

She also said the law might impact business confidence in Hong Kong and will not benefit the economy.

The unrest has hammered retail sales which fell by their steepest on record in October as protests scared off tourists and hit spending.

Along with suspending visits by official US military ships and aircraft, the Chinese regime would sanction organizations including the National Endowment for Democracy, the National Democratic Institute for International Affairs, Human Rights Watch, the International Republican Institute, and Freedom House.

Lam said approvals for such port visits were a matter for China's foreign ministry.

While the nature of the sanctions remained unclear, the move appeared to back up Chinese threats that the United States would bear the costs of the decision.

Last week US President Donald Trump signed the Hong Kong Human Rights and Democracy Act, which requires the president to annually review the city's favourable trade status and threatens to revoke it if the semi-autonomous territory's freedoms are quashed.

Lam has renewed her appeals for peace but - though it withdrew in September the extradition bill that sparked the first demonstrations - her administration has failed to offer any further concessions to the protest movement despite the election results.