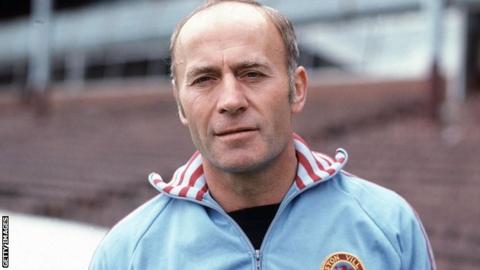 Following Saunders" death Aston Villa released a statement which read: "It is the sad duty of Aston Villa Football Club to announce that our former manager, Ron Saunders, has passed away at the age of 87'.

His Villa side won the competition again two years later - defeating Everton in extra-time of the replay - before winning the league title four years after that.

"Ron Saunders died at 15:00 GMT on Saturday and his family have asked for their privacy to be respected at such a hard time", a club statement said.

Saunders took over at Villa Park in 1974 with the club in the second tier and in his first season took them to promotion and a League Cup final, where they beat Norwich, after which he was named manager of the year.

He ended his managerial career at West Bromwich Albion, retiring in 1987.

As a mark of respect, the players will wear black armbands and hold a period of applause in the match against Leicester on Sunday afternoon.

Former Villa striker Stan Collymore was among the first to pay tribute, tweeting: "Sincerest condolences to Ron's family and friends".

"The man who made many Villans fall in love with a club and a team that gave us the very best of days".