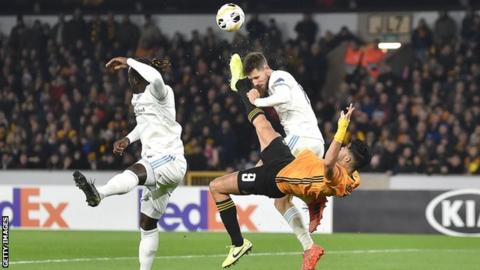 Raul Jimenez scored a 92nd-minute victor as Wolves beat Slovan Bratislava 1-0 in Thursday's Europa League clash to move to the brink of the knockout stage.

Greif made the first of a string of fine saves in the eighth minute with a brilliant reflex stop to keep out Joao Moutinho's deflected shot from 25 yards out.

Jimenez scored the victor in the second minute of added time to take Wolves to the brink of the last 32 but had looked particularly distressed as Bajric was receiving attention.

Wolves had a golden opportunity at the start of the second half after Vasil Bozhikov accidentally clipped the heels of Neto and the referee awarded a penalty.

Afterwards, Raul said: "It is hard for all of us".

It kept Santo's team in second spot in Group K, a point behind Braga, who they travel to Portugal to play next, and extended their lead over third-placed Slovan to five points.

The striker then set up Steven Davis to fire home via a deflection and move Rangers level on seven points with leaders Young Boys in Group G and three ahead of Porto and Feyenoord.

Slovan coach Jan Kozak said the injury was "quite serious", with a spokesman adding that Bajric was "conscious" after the game. It was an important result in Bratislava, Slovan are a very good team, they caused us problems and we expect a tough game again.

Slovan Bratislava defender Kenan Bajric has been cleared to return to Slovakia on Friday after undergoing brain scans in hospital.