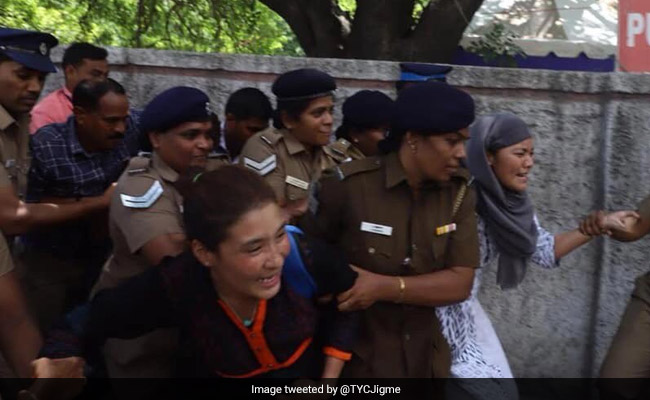 Chinese President Xi Jinping said on Saturday he had a free and frank discussion with Indian Prime Minister Narendra Modi and would pursue proposals the two leaders discussed to improve bilateral ties.

Xi and Modi held their second informal meeting in the southern Indian city of Chennai following their first in the central Chinese city of Wuhan in April a year ago.

Banwarilal Purohit, governor of the Indian state of Tamil Nadu, and the state's Chief Minister Edappadi K. Palaniswami wait beside the gangway and present flowers to Chinese President Xi Jinping upon his arrival in Chennai, India on October 11, 2019. Xi's trip, which extends into the weekend, includes a second informal summit with Modi and the first visit to Nepal by a Chinese president in 23 years.

Modi took Xi for a tour of the temples of Mahabalipuram, a world heritage site and had a casual interaction, while they sipped coconut water.

In their first informal meeting a year ago, the two leaders reached the consensus that the differences between the two countries should not be allowed to turn into disputes.

Of course, there has been no shortage of mutual praise and reference to history. Modi in Xi had also apparently tried to iron out wrinkles that emerged after New Delhi revoked autonomy status of its Jammu and Kashmir state that borders China. "We are able to bring forth closer cooperation between both countries", Xi said, while adding that the discussions have been "very in-depth" and "good".

It shows that both leaders hope for bilateral ties to develop steadily, and the second informal meeting is seen as carrying that forward, Singh told Xinhua News Agency. The wisdom from the two countries' ancient and profound civilizations can provide inspiration for solving various challenges facing the world today, said the Indian prime minister. The two leaders agreed that China and India should respect and learn from each other so as to jointly achieve common development and prosperity, as well as the great rejuvenation of the two civilizations.