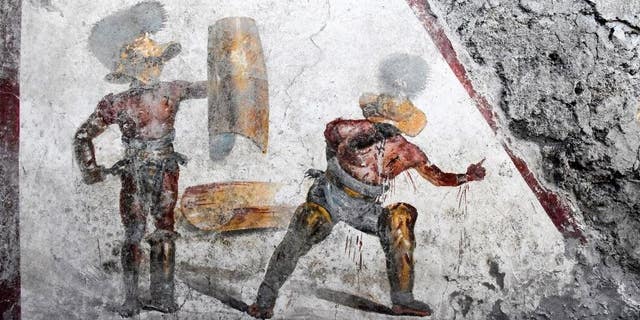 An intact fresco portraying fighting gladiators has been unearthed by archaeologists in Pompei, the ancient Roman city buried under a thick carpet of volcanic ash in 79 AD.

The fresco, which depicts the end of a fight between two gladiators, is the latest find at the Regio V site to the north of the archaeological park, an area that remains closed to the public.

The vibrant blue, red and gold fresco, which measures three feet by 4.5 feet, is in an area that's not now accessbile to visitors.

The fresco was discovered on a wall below a staircase in what was probably a tavern frequented by gladiators, with accommodation upstairs either serving as lodgings for the owners or as a brothel.

"What is particularly interesting is the extremely realistic representation of the wounds, such as the one on the wrist and chest of the unsuccessful gladiator, from which the blood runs, wetting his leggings", Osanna said.

The losing gladiator is holding up his finger to "implore mercy", Prof Osanna said. But the site in recent years has also received bad publicity due to decay and poor maintenance.

Pompeii was a flourishing city destroyed by the eruption of Mount Vesuvius in 79 A.D. Last October, the finding of a charcoal inscription suggested that the eruption happened in October 79 A.D. rather than August of the same year, as was previously believed.

Franceschini stressed that the fresco finding "really shows that Pompeii is an inexhaustible source of research and knowledge for the archeologists of today and for the future".

As part of a multi-million project founded by the European Union, Pompeii is now undergoing its most extensive excavations since the 1950s, with archeologists removing tons of debris from long-buried areas of the city.

Senior adviser to Pompeo resigns. Was it in protest?
Secretary of State Mike Pompeo , left, during the G-20 summit with his senior adviser Michael McKinley, right, on June 28, 2019. Michael McKinley has held several diplomatic posts, including USA ambassador to Peru, Columbia, and Afghanistan. 10/12/2019