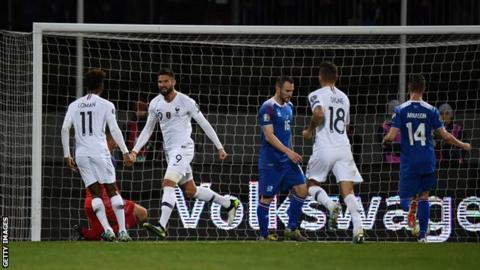 N'Golo Kanté was left out of France's squad which faced Iceland on Friday after complaining about an injury ahead of kick-off, but France manager Didier Deschamps insists the decision was only a precaution.

The problem was serious enough for the midfielder to be replaced by Moussa Sissoko in the starting line-up, which could now leave Chelsea boss Frank Lampard with a defensive headache.

"He felt a pain in his adductor muscle", Deschamps said, quoted by Goal. "He had a feeling where he didn't feel comfortable to play".

"I knew Moussa [Sissoko] would be ready".

The 28-year-old has started just three of Chelsea's opening eight league games after being troubled by an ankle injury in the early weeks of the season.

"I do not think it's too serious for [Kante], but I do not have an answer [to whether he'll play against Turkey on Tuesday] tonight".

However, his latest injury problem means he now faces a race to be fit for the club's next fixture; a home clash against Newcastle United on October 19th.