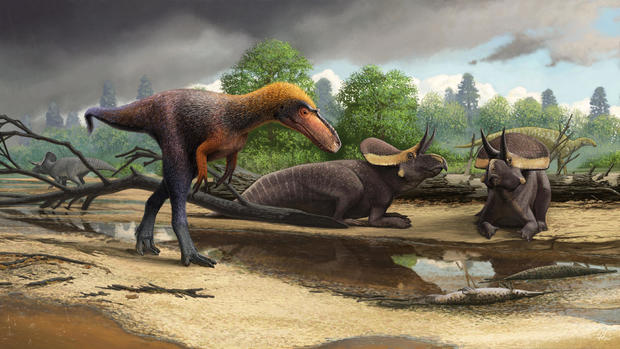 Suskityrannus hazalae isn't the first or even smallest of the Tyrannosaurus family tree, but Nesbitt said it provides the best example of how this family of modest-sized dinosaurs evolved into the towering T. rex.

The study's lead author, Sterling Nesbitt, a paleontologist at Virginia Tech in the United States, said that the fossils of the smaller T. rex cousin could provide one of the best examples yet as to how a smaller family of dinosaurs evolved into monstrous super predators.

Nesbitt found a set of its bones in 1998 when he was 16, while serving as a volunteer on a dig in New Mexico with a famed paleontologist.

Sterling Nesbitt, an Assistant Professor of Geobiology at Virginia Tech, sits for a photo next to the fossilized bones of Suskityrannus hazelae, a miniature adult Tyrannosaurus dinosaur relative. The new dinosaur is called Suskityrannus hazelae, named after the Zuni word for coyote. The duck-billed dinosaur dates back 92 million years, about 20 million years before the T. rex stomped the Earth. But for about two decades, scientists weren't certain what it was, until other small cousins of T. rex were discovered.

In fact, the first partial skull of the mini tyrannosaur was found in 1997 by Robert Denton, now a senior geologist with Terracon Consultants, an engineering consulting firm in New Jersey.

Monday's report said that Suskityrannus hazelae provides an intermediate link between older, smaller tyrannosaurs and the big, last-surviving members of the species.

The newly discovered cousin - which was three times longer than it was tall - weighed between 45 and 90 pounds, nearly nothing compared to the nine-ton king of the dinosaurs.

Smithsonian Institution paleobiologist Hans Sues, who wasn't part of the study, said it was an important find. "Suskityrannus is the first really good record of the early tyrannosaurs in North America", he wrote in an email. T. rex weighed around 9 tons and measured about 40 feet (12 meters) in length.

Although the discovery helps with understanding how the T. rex evolved, paleontologists have said that it is still unclear as to why the smaller carnivorous dinosaurs evolved to become so large.

Physicists have detected first-ever collision of black hole and neutron star
This discovery could soon answer questions related to the understanding of an invisible universe and the afterlife of dead stars. Since the beginning of their third observational campaign on 1 April, the detectors have also spotted three black hole mergers. 5/07/2019

Kim Sei-young Wins 1st LPGA Championship of 2019
India's Aditi Ashok shot even-par 72 in the penultimate round with five birdies and equal number of bogeys and lying at T46. But it was Kim who emerged the victor , improving her LPGA playoff record to 4-0 as she captured her eighth tour title. 5/07/2019

Ahead of Uber IPO, drivers plan strike over wages, job losses
For-hire drivers in at least eight major cities will go on a two-hour strike against Uber and Lyft ahead of Uber's planned initial public stock offering on Friday. 5/07/2019

Bodies believed to be missing mom and daughter found in Alberta
He said Sunday there are "no words" to express what he's feeling about his tenants' disappearances and being named the suspect. Police searched a Mercedes-Benz SUV and a Cranston home as part of their investigation. 5/07/2019

Ex-Goldman Sachs banker extradited to USA to face charges
Ng, more commonly known as Roger Ng, has been in custody in Malaysia since November when the U.S. lodged an extradition request. Ex-Goldman Sachs banker Roger Ng (left) and his lawyer Marc Agnifilo leave the federal court in New York May 6, 2019. 5/07/2019

Pulitzer Prize-winning Reuters reporters freed from prison in Myanmar
The operation sent more than 730,000 Rohingya fleeing to Bangladesh, according to United Nations estimates. Adler said in a statement that the news agency is "enormously pleased" that they have been released. 5/07/2019

Osceola County Declares May as Children's Mental Health Awareness Month
The CMHA believes efforts to promote mental health in these settings, including at work and in communities, has fallen short. The theme for the week is #GetLoud, encouraging people to talk about mental health and what it means to them. "... 5/07/2019

Jedi: Fallen Order Gamplay Confirmed for EA Play 2019
Meanwhile, Lucas, who directed four of the Star Wars films which Mayhew starred in, said: "Peter was a wonderful man". The fact that this is an art book cover also implies that we will be getting this scene through the film somehow. 5/07/2019

Stars goalie Bishop 'fine' after exiting early
After the puck eluded a few players in front of him, Dallas goaltender Ben Bishop wasn't able to react to the high shot in time. The Blues have had trouble lately putting together back-to-back good showings and I'm not sure I trust Binnington in net. 5/07/2019

Iran to restart some nuclear activity in response to USA sanctions
President Donald Trump withdrew from the 2015 nuclear accord with world powers a year ago . Washington reimposed tough sanctions on Iran after U.S. 5/07/2019

Céline Dion Stuns at Met Gala in Gravity-Defying Headpiece
Celine Dion has arrived to the 2019 Metropolitan Museum of Art's annual Costume Institute Benefit and she is serving looks. Regina King didn't take herself too seriously while getting ready for the 2019 Met Gala . 5/07/2019

Kim Kardashian Realizes That Being A Law Student Kind Of Sucks
As my first year is nearly coming to an end I am preparing for the baby bar, a mini version of the bar, which is required when studying law this way. 5/07/2019