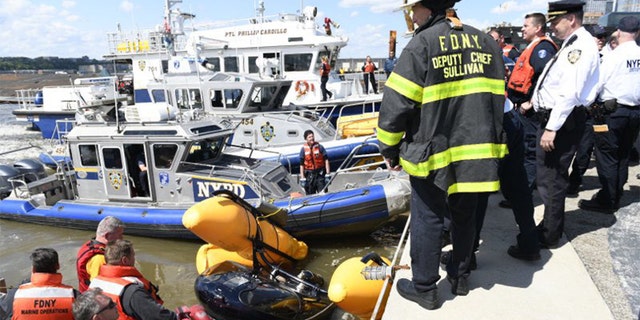 New video shows the moment a helicopter crashed into the Hudson River Wednesday.

- Emergency crews from several agencies responded to a helicopter that crashed in the Hudson River near West 30th Street at around 2:30 p.m. Wednesday, officials said.

It's believed no passengers were aboard the chopper.

A mobile phone video of the helicopter going down, taken by a WCBS TV editor, showed it descending into the river about 46 metres from the helipad.

NY police officials told a news conference that the 34-year-old pilot suffered an injury to his left hand.

A deckhand on ferry crossing the Hudson, Edwin Montoya, pulled the pilot out of the water after witnessing the crash, its captain said in a statement released by the ferry company, NY Waterway.

The FDNY said that a heliport worker was injured by debris.

An alert issued by the city's emergency management department warned of a large police and emergency response at the scene near 12th Avenue and West 34th Street in Manhattan.

"It was just instinct".

A ferry was carrying commuters from West 39th Street in Manhattan to 14th Street in Hoboken when Capt. Adam Sciaino saw the helicopter go down, according to NY Waterway. "We're right here. Edwin Montoya is an outstanding deckhand".

According to the Special Ops authorities, scuba divers were called in shortly after the crash to assist with the helicopter's recovery.

As there were no injuries, the incident won't be investigated by the National Transportation Safety Board, Blade said.

The helicopter drops down into the Hudson River. "The pilot was exiting the helicopter and getting onto a civilian boat". The pilot's injuries are also not considered life-threatening.

"Firefighter Chris Morgan and I entered the helicopter in the water to make sure there were no additional passengers. We verified that the emergency fuel was shut off, and secured the helicopter using ropes to the bulkhead and an FDNY Marine unit", he continued.