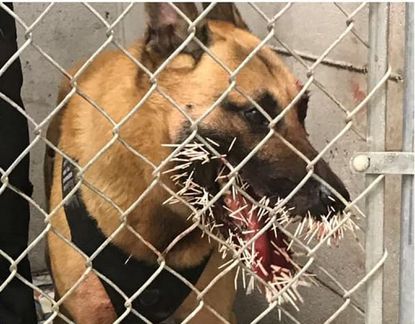 According to the Coos County Sheriff's Office, a sheriff's deputy saw 29-year-old Devin Wilson, a wanted suspect, on Evergreen Lane on April 20. Wilson fled after being spotted by a deputy in the Barview area, prompting the K-9 track, deputies said.

Deputies said Odin is doing well and recovering at home, but the porcupine "remains at large".

The pursuit of the suspect was immediately suspended and Odin was rushed to the Hansen-Meekins Animal Hospital, where he was sedated and treated for more than two hours, cops said.

Now CCSO is asking for the public's help in tracking down Wilson, who it says has "committed new crimes" and still has outstanding warrants.

While trying to locate the man, Odin encountered the porcupine on a path and was left punctured with dozens of quills around his mouth, tongue and left eye. He will have a follow-up check in one week to ensure there are no issues with his left eye, which was barely missed by some quills, but appears OK at this time'.

Odin's medical bills were picked up by a charity, Friends of Coos County Animals.

Jazz fans prepare for high-stakes playoffs game
The streak extended to 12 in the third quarter before Royce O'Neale broke the ice with a 3-pointer from the right corner. Four times before this year, the Jazz have trailed 3-0 in a best-of-seven series, but have never won more than one game. 4/24/2019