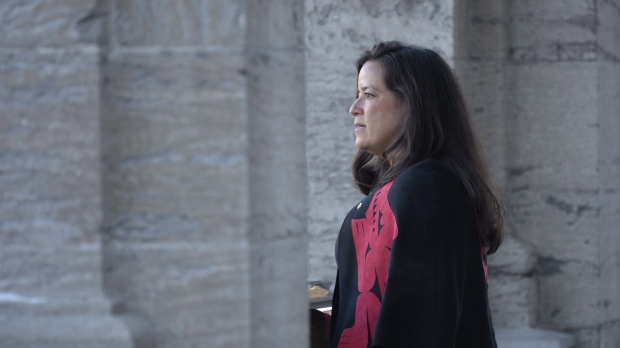 Given that Prime Minister Justin Trudeau and the Prime Minister's Office insist they did nothing wrong in the SNC-Lavalin affair, surely they are anxious to publicly explain the full story of what they did do to Canadians, under oath, subject to opposition questioning.

Guelph's MP says it isn't up to backbenchers like himself to call for an open and transparent investigation into an allegation that former attorney general Jody Wilson-Raybould was pressured by the Prime Minister's Office to help SNC-Lavalin avoid criminal prosecution.

The firm is facing fraud and corruption charges related to contracts in Libya.

To date, Wilson-Raybould has said little about the allegations, citing solicitor-client privilege.

The prime minister said Wilson-Raybould reminded him of a conversation they had in the fall where he told her that "any decisions on matters involving the director of public prosecutions were hers alone".

Although she has not appeared with him at events Sunday and today in the Vancouver area, Trudeau says he has met with her a couple of times since arriving in her hometown.

According to the Globe, Wilson-Raybould was unwilling to play along and did not follow through despite the high-level pressure.

The federal conflict of interest and ethics commissioner has agreed to launch an investigation into allegations of interference by the Prime Minister's Office in the SNC-Lavalin case, the NDP has confirmed.

"In our system of government, of course, her presence in cabinet should actually speak for itself".

Charlie Angus, the party's ethics critic, said in a statement that Trudeau promised Canadians he would change the way politics worked in Ottawa, but instead his Liberal government "continues to prioritize helping insiders and the rich get ahead".

New Brunswick MP Wayne Long said in a statement posted to social media Monday that he was "extremely troubled" when the allegation surfaced last week and nothing he has heard since has made him feel less unsettled.

"How the law treats individuals or corporations in our society is not, and should never be, incumbent upon the political pressure they can exert upon politicians", he says.

Conservatives and New Democrats on the justice committee joined forces to get an emergency meeting on Wednesday to consider a motion calling on nine high-ranking government officials to testify, including Wilson-Raybould herself. Over the weekend, the Toronto Star reported that the majority-Liberal committee is likely to block the opposition's attempt to launch a study of the allegations.

Despite Lametti saying in an interview on CTV's Question Period that he has yet to see any evidence to merit a House of Commons Justice Committee study into the matter, there were renewed calls Monday for the Liberal members to support one. However, he emphasized it would be inappropriate to comment on an issue before the courts.

This in favour of a deferred prosecution agreement, which would allow SNC-Lavalin to admit wrongdoing and pay a fine, thus enabling it to keep bidding on federal contracts, which it would not be able to do for a decade if convicted criminally.

"It is important to remember that while the attorney general sits at a certain distance from his cabinet colleagues, in Canada - unlike in other countries - he does not work in isolation from them, or the important experiences or considerations that those colleagues bring to the table". Montreal MP David Lametti is the new attorney general. That would be interference.

"I know the Justice Committee is looking at that", said Longfield.

Kentucky vs. Mississippi State live stream
Schaefer said the bye gave the Bulldogs more time to work on fundamentals and to catch their breath so they can finish strong. He said it is good to "slow down" and to "simplify" some things they have done so spacing and shot selection can improve. 2/12/2019

University hunts mom prowling campus looking for date for her son
The students said the woman showed them a picture on her cell phone and asked if they were interested in dating her son. 2/12/2019

The Great Debate: Who is going to win the Premier League?
In the morning I was still weak and had diarrhoea I must say the tablets helped a lot. "It is always a good response when you win. It means Liverpool fly to Marbella on Monday for warm weather training with their season firmly back on track. 2/12/2019

Nicki Minaj Says She Was ''Bullied Into Staying Quiet'' by Grammys
BET hopped on Twitter to call attention to the shade happening all over our timelines and inadvertently got hit by the crossfire . Adding, "Unfortunately the respect we have for Nicki was violated by this post that should never have been written. 2/12/2019

Knicks remove photo of Durant from promotion
It's no secret that the New York Knicks want to sign multiple stars this summer . Durant recently ripped the media for its coverage of his impeding free agency. 2/12/2019

BVB star Sancho tells Chelsea fans what they'll get in Pulisic
The club had shown with Pulisic they were going in the right way, playing youngsters and giving them a chance. Earlier, Legit.ng reported that Jadon Sancho is a summer transfer target for Manchester United . 2/12/2019