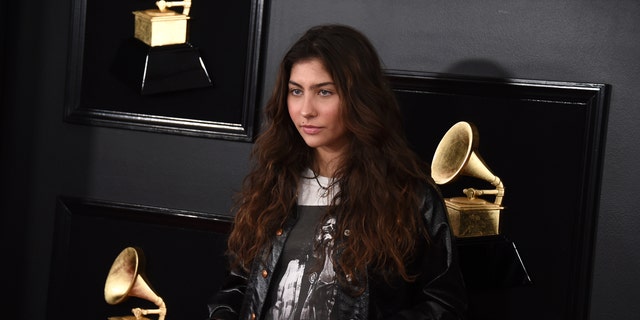 Chris Cornell's children Christopher and Toni accepted a posthumous Grammy Award for Best Rock Performance on behalf of their father and offered a speech paying tribute to the late star.

The Soundgarden frontman won best rock performance with his posthumous single "When Bad Does Good".

"I never thought we'd be standing here without my dad and I'm sure he'd be proud and honored", Christopher said.

"He was known for many things", Christopher shared.

"He was also one of the greatest poets of his time", he continued, "whose voice, soaring unforgettable vocals, made him the voice of a generation. While he touched the hearts of millions, most importantly he is known for to us is for being the greatest father in our ear". After receiving the microphone from her brother, Toni added, "His voice was his vision and his music was his peace". Thank you so much to the recording academy, Universal Music Group, Ron Laffitte, Brent Smith, Michael Cooper, and thank you to our mom: his love, his muse, and his savior, who continues to carry out our father's legacy.

This is Cornell's third GRAMMY win after winning twice in 1995 with Soundgarden, taking home the awards for Best Metal Performance and Best Hard Rock Performance.

Violence mars yellow vest protest in Paris as unrest spreads to Rome
Police used batons and fired tear gas in Paris to disperse demonstrators, some of whom threw debris at riot police hunkered down. In Rome, tens of thousands of people took to the streets to protest the course of Italy's populist government. 2/11/2019

Potential Knicks target Kawhi Leonard passes on free agency talk
Green and Norman Powell each had 14 points for the Raptors, who have won their last three games, all on the road. The three-time All-Star entered late in the first quarter and made a hook shot on his first try. 2/11/2019

Meet Chloe Flower, Cardi B's Grammys performance piano player
We can only imagine what it felt like live; we can feel fresh waves of adrenaline radiating from our television sets. Cardi B's pianist Chloe Flower steals the show during the rapper's Grammy performance of 'Money '. 2/11/2019

Shawn Mendes and Miley Cyrus Unite Again on Grammys Stage
They quickly spotted Mendes' guitar in the background, and what looked like his name written on another piece of equipment. Mendes' album Shawn Mendes was nominated for two awards, including Song Of The Year, at tonight's show. 2/11/2019

Avengers: Endgame directors play down accuracy of recent toy leaks
The directors have already conducted a few test screenings and are still considering if there will be an intermission in the film. We'll find out soon enough though, with the film only a little over two months away from release. 2/11/2019

Boutier, Law take Vic Open golf titles in Australia
Australia's Sarah Kemp shot the day's low round of 65, playing in the day's second group after starting the round tied for 35th. A return to the LET in 2018 appears to have rekindled her desire and form and her final round was something very special. 2/11/2019

Fed Cup 2019: Halep and Pliskova win opening Fed Cup rubbers
France and Belarus reached the Fed Cup semifinals after sweeping their first-round series on Sunday. Halep improved her record against Pliskova to 7-2 to put Romania one win from advancing. 2/11/2019

Netanyahu rival speaks of possible West Bank withdrawal
The Gaza pullout was a boost for the Palestinian Islamist movement Hamas, which has since fought three wars with Israel. The interview came as Likud held its primary election to select its list of candidates for the parliamentary election. 2/11/2019

''This Is America'' Wins Best Music Video at 2019 Grammy Awards
Childish Gambino has notched 12 career Grammy nominations and is also up for the coveted Record of the Year award on Sunday. The 61st Annual Grammy Awards are broadcasting live from Staples Center in Los Angeles on Sunday, Feb. 10 at 8:00 p.m. 2/11/2019

‘New Zealand exists!’ Consternation on Twitter after Ikea leaves country off map
Last year, a member of Reddit pointed out an Ikea store which had a map on their wall missing the country out. "Our company used to make all the maps for Ikea and I can confirm that of course New Zealand was on them". 2/11/2019

Aladdin trailer revealing Will Smith as the Genie airs during Grammys
Whether this means Smith's genie is capable of un-blueing himself by shape-shifting remains to be seen. With Smith's Genie crashing the party at the very end. 2/11/2019