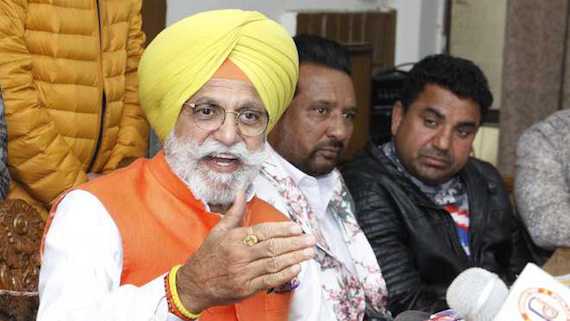 "Rana Gurjeet's resignation has been accepted", said Chief Minister Capt Amarinder Singh after his meeting with Rahul Gandhi at the national capital.

The Punjab BJP said the CM accepting the resignation proved that the allegations of corruption against Rana were correct.

Eight months after being embroiled in a sand-mining scam and ten days after his son got entangled in an Enforcement Directorate case, The much-controversial stint of Rana Gurjit Singh as Punjab's power and irrigation minister has ended in just 10 months of the Congress Government.

Sources in the party maintained that Rana Gurjeet's fate had been sealed even before the meeting was started.

"In his resignation, Rana Gurjit had said that though he had not been associated with his family business for the past 10 years, the controversy surrounding it in recent months had left him with no option but to tender his resignation in the interest of his party".

During the meeting, Rana Gurjeet's resignation was the first issue to be discussed, followed by discussion on Cabinet expansion, restructuring of party's state unit, impending Ludhiana civic body polls, and 2019 Lok Sabha polls.

He did not want the issue to mar the good work done by the Congress government in Punjab and had, in the bigger interest of his party and government, chosen to step down, he said.

"Rana Gurjeet is considered close to Amarinder, but he is still most likely to be dropped if the party high command has already made up its mind".

"I have always been a Congressman and will die as a Congressman only", he said while interacting with reporters after his resignation was accepted.

"Truth can not be suppressed for long, no matter how strongly and repeatedly a lie may be told", he said while adding that he had not committed any wrong or any illegal act but had resigned to take the wind out of the opposition's sails for its baseless criticism of the government and the Chief Minister.

He also raised question over the formation of the Justice Narang Commission to probe the allegations of impropriety against Rana in the multi-crore sand mining auctions.

"With illegal sand mining being a key poll plank of the Congress, which even prompted the party to introduce e-bidding, the campaign against the power minister had become a sore point, especially with many politicians having stakes in the sand mining trade".

"Criminal matters such as the sand mining scam should be dealt with on merit by the chief minister".

The ED, this month, had issued summons to Inder Partap Singh, who is MD of Rana Sugars Limited, for allegedly raising Rs 81 crore overseas by floating global depository receipts for one of the family-owned companies without the mandatory permission of the Reserve Bank of India.

AAP leader Sukhpal Singh Khaira who is a known Amarinder and Rana baiter had been gunning persistently for the latter's ouster over the last several months.

Hyundai: Golf GTI Deteriorates After Two Track Laps; VW Replies
Although the up! has slightly more power, the Golf weighed a mere 810kg compared with the new car's 997kg. Deliveries will begin at the end of next month. 1/19/2018

United Kingdom appoints minister for loneliness
It could be associated, he wrote, "with a greater risk of cardiovascular disease, dementia, depression and anxiety". Sir Michael said he felt men were more liable to loneliness than woman because they found it harder to be sociable. 1/19/2018

Spotify make it clear they don't endorse the Australian Conservatives playlist
Senator Bernardi responded directly to Hayes on the social media outlet and showed no signs of modifying the list. He tweeted: "Get over yourself @darrenhayes". 1/19/2018

Gay Couple Receives 'Homophobic' Fliers Instead Of Wedding Programs
Instead the pamphlets they received warned that, among other notions, "Satan can only influence us to want to sin". Borg and Heasley had to spend more money to get the correct programs printed - though not through Vistaprint. 1/19/2018